The Directed Studies program consists of three integrated full-year courses in Philosophy, Literature, and Historical and Political Thought. Students entering the program must enroll in all three courses and are expected to enroll for both semesters. The courses begin with classical antiquity and the Bible and continue through the Middle Ages, the Renaissance, and the Early Modern period, ending in the twentieth century with authors such as W.E.B. Du Bois, Virginia Woolf, Hannah Arendt, and Iris Murdoch. Each of the three courses meets weekly for one lecture and two discussion seminars. The heart and soul of DS are its seminars, in which small groups of students working closely with a professor explore and debate the meaning—or meanings—of an influential text. The regular lectures and seminars are complemented by a series of colloquia featuring distinguished speakers from within Yale and beyond. Our study of written texts is also complemented by gallery talks and study sessions at the Yale Art Gallery, the Yale Center for British Art, and the Beinecke Rare Book and Manuscript Library.

Directed Studies has no prerequisites. Students excel in DS with or without any background in the texts studied.

Yale University has a world-class faculty, and Directed Studies draws instructors from academic disciplines across the university. Our professors are based in departments such as Comparative Literature, Philosophy, Political Science, and History, but come also from Religious Studies, Classics, English, Spanish and Italian, German, French, East Asian Languages & Literatures, Near Eastern Languages & Civilizations, the Law School and the Divinity School. Part of what makes the DS experience so dynamic, is the confluence of ideas and approaches the faculty bring to the texts we study.

Directed Studies began in 1947 as a “radical experiment” in response to a shift in educational philosophy. In the 18th and 19th centuries, the purpose of college had been to educate young men to be ethical and responsible citizens and leaders. By the beginning of the 20th century, many colleges were shifting away from what had been a traditional education in history, theology, and classical literature, and toward disciplinary specialization (“majors”).

Concerned that the broad foundation of a traditional Yale education would be lost, a group of faculty and alumni proposed in 1946 what became Directed Studies. Intended from the start to be an option for a self-selected subset of Yale undergraduates, DS was initially a two-year program that included Economics, Natural Sciences, and Art and Music History. The success of the experiment was a surprise, as witnessed by articles published in the New York Times and elsewhere, and prominent Yale intellectuals such as Hannah Gray taught in and were vocal advocates for the program and the kind of education it offered. In the 1970’s, under the leadership of Professor of Classical History Donald Kagan, the program was revised from two years to one given the shape it has today, consisting of full-year courses in Literature, in Philosophy, and in Historical and Political Thought.

Chair of the Humanities Program 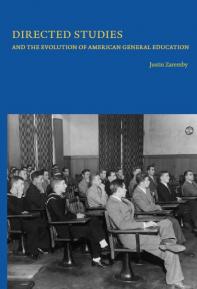 EARLY SIGNS OF SUCCESS FROM 1948 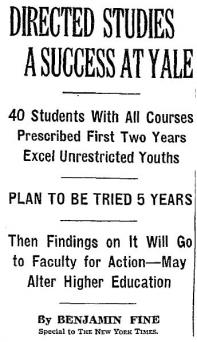