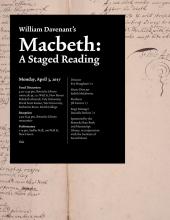 Staged Reading of William Davenant’s adaptation of Shakespeare’s Macbeth for a Restoration audience. Preceded by a panel discussion, including Professor David Kastan, and a reception.

The Beinecke Library holds the only extant manuscript of Macbeth–but it’s not the Macbeth that we recognize. In the 1660s, Sir William Davenant adapted Shakespeare’s play for a Restoration audience. His alterations included edits to Shakespeare’s language for ease of comprehension, a greatly expanded role for Lady Macduff, a clearer stance on regicide (this was an important point to clarify after the English Civil War!), several new songs and dances, and even a “flying machine” for the witches.