DS at the Beinecke 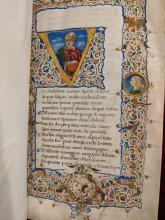 Dr. Sara Powell and Dr. Ray Clemens took us through a tour of the Beinecke’s holdings in medieval and renaissance Europe: objects on display included a Second Folio edition of Shakespeare’s plays from 1632, a huge and lavishly illustrated edition of Augustine’s City of God, and an arrest warrant signed by King Charles I for two men called Whalley and Goffe who ended up fleeing to New England and subsequently became significant members of the New Haven community.